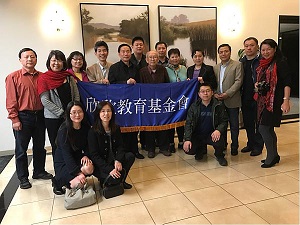 Gu Shufen, president of the Dongbei Association, welcomes Jilin visitors at the San Francisco International Airport. She says that the work and services of the Jilin Provincial Overseas Chinese Affairs Office and the All-China Federation of the Returned Overseas Chinese are very sincere, and hopes to maintain the friendship and goodwill.

Yang Yiqing, the volunteer responsible for coordinating, explains that of the three Shin Shin schools established back in 1998 in northeastern China, two are in Jilin. Within 20 years, the number of Shin Shin schools in Jilin increased to nine. She said that in the beginning, the initial investment towards each school was RMB10,000 yuan. Now, with Shin Shin’s initiation, it has been increased to RMB50,000 yuan, in addition to various donations including books, computer rooms, and electronic teaching equipment. Moreover, Shin Shin gained more local support through various overseas Chinese affairs agencies in Jilin.

Shao Zhongquan, a veteran of Shin Shin, said that Shin Shin’s mission is to make the world for everyone, a utopia, and thanks the Jilin Overseas Chinese Office for helping build the Shin Shin schools.

Leader of the delegation and Jilin Provincial Government Foreign Affairs Office Deputy Inspector Li Jingfa explains that Jilin’s Shin Shin schools are thriving with a high graduation rate, and appreciates Shin Shin’s generous donations and involvement. He also thanks Shao Zhongquan: “The elderly gentleman is a role model for the younger generations.” He believes that Shao Zhongquan and Shin Shin will certainly have students all over.